In February 2017, I acquired a new technology in home/office WIFI connection called a Mesh. The unit I got was from Linksys and I loved it. You can read about it here.   It was smooth, consistent, and was able to cover parts of my home office and the rest of the home that never before had Wi-Fi service including the front porch and basement storage areas.  It was a $499 upgrade that was definitely worth the money.

Now we have more devices connecting than you can count. Zoom meetings, movie downloads, video streaming all take up bandwidth not to mention the occasional gigabyte download of Windows 10 updates. So, we have come to the point that it is three years later and I need an upgrade. First of all, WIFI6 is available and it promises better coverage, better control, and faster speeds and with my office internet connection roaring along nicely, at www.speedtest.net , it was time to give the new systems a run. 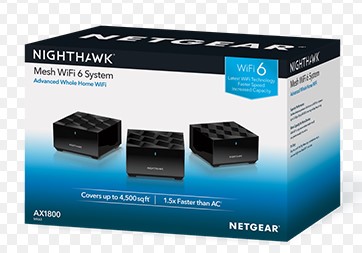 What I got was the Netgear Nighthawk AX1800.  I have been using all sorts of technology from Netgear from their Storage units to Hubs and Switches to Routers for years and thought this would be a great time to switch to their newest WIFI6 system.  So, what is new in WIFI6 and why should I bother with it.  The Verge has a terrific answer here that is worth reading.  Besides speed, it offers better throughput for all of the new devices connecting out of your home or office that need Wi-Fi.  Also, when you get that new phone, tablet, or laptop that supports 802.11ax, you are getting support for WIFI6. WIFI6 was actually introduced in October 2018 and with it came a new naming convention to help us tell who and what is what. You can read the Wi-Fi Alliance news here.  Back to The Verge for an better description of the changes.

So, with multiple devices around the home and office (10 connected and a ton disconnected), it was time to upgrade. We have also been having a lot of drops and reconnects and here is where it all gets murky, is it the wi-fi, the modem, the lines, AT&T, or who? And with a system that is over 3 years old and running day and night, is it time to upgrade? I could never get a really good answer on how long these should last.

The box is simple and to the point. The genius of Mesh networks is that you can start small and just add if you need additional space covered. I originally had three of the Linksys Mesh systems so wanted to go with three so that I can expand the coverage even further to the Porch, Patio, and the far reaches of the spare bedrooms upstairs.

Like the other Mesh networks I have looked at, this comes with a single unit to use as the main router and you can add multiple satellites. In this box came the router, two satellites, an ethernet cable, and three power adapters. What is cool about these devices is that each one has an ethernet port that you can direct connect to another device as well. Like the other systems, you start it all by downloading the Netgear Nighthawk App for your smartphone that will not only connect and set up the network but also manage it going forward.  I really liked the packaging as it had each unit packed away so that any damage to the box will not affect them in shipping or handling. A quibble here is that you could easily throw away the SSID name and password that is on a sticker on the router but as I discovered in setting up the system, I did not need it as I wanted a different network name.

You first download the Netgear Nighthawk App on your phone. In Google Play Store, it shows only 3.9 stars of 19K reviews. You Sign on or create a new account and setup a two-step verification through a smartphone.  It was also good enough to recognize my fingerprint for touch id.  You then scan the QR Code on the back of the router unit and then need to power off and on your modem connected to your internet service which at least with AT&T takes a few minutes. It then walks you through connecting your first device which will be the main router. From there you personalize the router with a new SSID and password, set up the login for the App, and annoy you with multiple suggestions that you use the Nighthawk app on your smartphone which I am already doing. It then checks for and downloads a firmware update which is good.

Adding the satellites was a bit tricky though as the system tells me that they were not connected after following all the directions when they were. The lights on the front turned the OK blue but the APP said not connected. Turn off the Smartphone App, restart it and all is well.  The App is pretty thorough in what it shows you and how it is presented. You can drill down from each satellite and it will tell you what device is connected but it did not show my Ring doorbell which is connected and working so go figure. And I think that was a Ring Software issue. It first said it was connected and then not. So, into the Ring software, reset the Wi-Fi settings and it works just fine.

The main App screen is very informative with Device Manager that shows you what is connected; Internet Speed to show you how fast you are connected; the Network Map of the Satellites which you can name to better know which one is which and where it is located; Guest Wi-Fi to allow others to connect; the Wi-Fi settings for the network; there is a Traffic Meter; and the Wi-Fi Analytics to show you how good the signal strength is for each room of the house and I was able to add a dozen different locations including several outside. It also tells you if you have any channel interference but unfortunately, you can’t change it with the App. You need to log into the router directly to do that. Odd though as I sit in my office near the router, it tells me that I only have 40% strength there. But I have also seen the numbers change dramatically; is that my daughter watching a movie?

As you can see, so many things can and will interrupt your network and it gets tougher all the time to see who is at fault.  Unfortunately, the help files that are part of the App don’t help much at all. Also, I would have liked to have some kind of diagnostic tools to better tell me how the system is doing and whether the satellites are too far or too close. For instance, If I go to WiFi Analytics, it tells me my signal strength is at 60% even though the smartphone is only five feet away from the MR60 Router. While a lot of information on the charts, they were not designed for a casual user and if the diagnostic information is there, it wasn’t very clear to figure out. I could use a user guide. 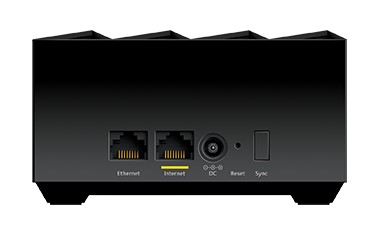 One other very useful feature of these units is that they have an ethernet port as well on the back so that you can direct connect a device like a laptop, computer, or other backup unit to the network.

The great news is that having had this network running for a week now, there are no complaints from the natives or the equipment and that is great news. I can also connect from much farther away than in the past and that makes life so much easier for us as well. You can’t beat the price so definitely recommended.

Available from Amazon for $249 for the three pack.