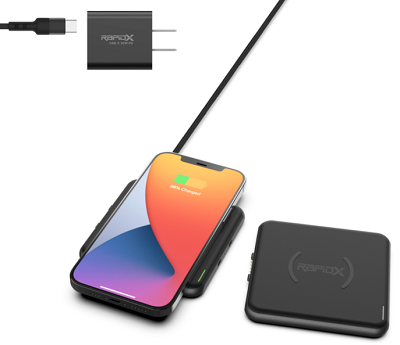 Another one of the holy grails of technology is getting things charged easily and quickly.  Forget about accumulating those cheap USB charging blocks and cables you see at all the convenience stores and on Amazon. They are cheap for a reason. Several years ago, I was getting ready to take a trip to China and thought it would be the safe thing to do is to get a couple of more Apple charging cables when I take my iPhone there, wow, were they expensive! So I found a set of three available on Amazon for an incredibly low price. I took the plunge and to test them out, used them for a couple of weeks. The first arrived DOA, the second died within a week, and the third lasted long enough to take with me. Before I left for that long trip, the company then asked me to write a good review and I told them what happened and after telling me they had a problem with their supplier, they sent me three more.  The first arrived DOA, the second died in the next week, and the third I took with me on the trip.  Those two that I took with me on the trip did not survive.

At the last Pepcom Home Now virtual show, I ran into a company, RapidX that was showing off their latest in wireless charging solutions and I was both surprised and impressed with what they had.  What was very cool was their Modula5 Wireless charging system and I needed to take a closer look.

What I liked about it was not only wireless charging for your Qi enabled smartphone, but also for the Apple Watch and any other Qi enabled device. So, I got the bundle that includes a Phone Pod, a Watch Pod, and a 30W adapter. The adapter is a solid piece of equipment and like most modern units, accepts input from 100 to 240 volts so will work anywhere you can find a socket to plug it in. It also has a single USB-C connector on the other end so unfortunately in a pinch, you can’t use this with a standard USB charging cable. For more juice, you can get their 65W adapter separately for $35 that will allow you to charge up to five phones at the same time.

My bundle included the Modula5 single phone pod unit. It is 3.5 inches square and about a half inch thick. Coated with a rubberized cover, anything you sit on it will stay there. It also has four rubber tips on the bottom so it stays where you place it. The included USB-C to USB-C cable is what you connect it to the 30W adapter.  It has a green LED charging light indicator as well. It is also has two magnetic connectors so that when you connect another unit to it, it will pass through and change the second. Once plugged in, just place your Qi enabled smartphone, an iPhone 8 or newer, Android phone, or even your Apple Airpod charging case on the top and you are good to go. My Jabra Elite 85t in ear headphones are Qi enabled and easily charged them. 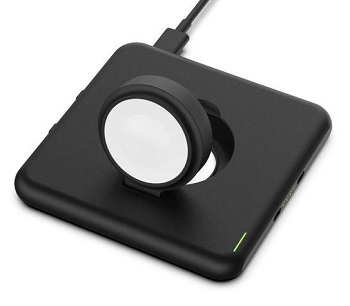 The third part of my bundle is the Apple Watch charging Pod. Like the first, It also includes the USB-C to USB-C cable but you won’t need it as you simply attach it to the first pod to share the power from the 30W charging block. It also has the green LED charging indicator and the two magnetic connectors to connect to another Pod. You can use it as a stand alone charging station by using the USB-C cable and the charging block. This will charge the Apple Watch series 1 through 6 by connecting it to the adjustable watch holder on the charging pod.

We plugged it in and it works like a charm. Sitting side by side, we charged up an iPhone, Apple Watch, and my Jabra in ear headphones. I like this package and it is quite well put together. The only complaints I heard were a wish that it came in white, rather than black, (and I hear that colors are coming) and the desire to keep the pods separated because of space constraints. If you do that, you will need another 30W adapter which is available here for $30. From RapidX, the Bundle B is just $99. Definitely worth keeping.