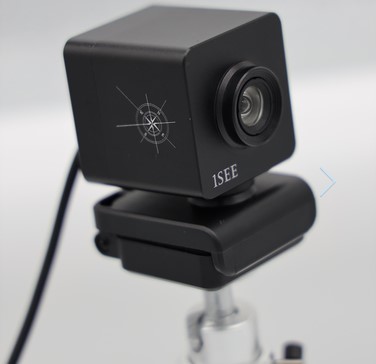 You know it had to happen. You can’t find a webcam anywhere in the stores or online except for the really cheap or super expensive models and so when VDO360 offered one of their new 1SEE models to take a look at, I had to see for myself. And it is impressive out of the box.

First of all, it is heavy, solid, and well built. It is a 1080p camera and as long as you have a USB2 port on your device or computer, will connect just fine. In fact, if your computer is pressed for USB Ports, it has an integrated hub built in with a single port. I mentioned it is heavy as it is built of aluminum and when you flip open the stand to mount on your monitor, you see it is lined with rubber for a steady mount. Keep the stand closed and you have a socket for mounting on a tripod like a Sunpak tiny flexible tripod I keep with my camera.

Plug it into your Windows 10 computer and it is recognized and the driver automatically installs. For a quick test, you can fire up the “Camera” App/Program on the computer and instantly you see a little red led light to let you know the camera is live and working and the image is excellent.  At this point comes the decision what to do about a microphone as there is not one built in. If you are in a noisy environment, then a headset is probably the best way to go but if you are using a desktop computer, you probably don’t have Bluetooth so you will need a separate audio headset. For me, here is where the Eyeball 2 I got from Blue Microphone some nine years ago works perfectly; it is really one of their Snowflake model microphones. What I like about it is that it really does a great job in reducing the surrounding sounds when I use it.  I just plug it into the USB slot on the 1SEE and it installs automatically. 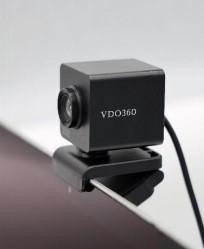 Spec wise, it is pretty much where you want a simple webcam to be. 2 megapixel camera, that can handle 1080p at 30fps all from a image sensor that is 1/2.9” CMOS. In the box besides the camera is a simple instruction manual but you really don’t need it.  You can use this webcam on a Windows, MAC, Android, or Linux system.

There is a nice feel to the 1SEE as when you mount it, it stays there. You can certainly adjust the angle of the camera whether it is mounted on your monitor or tripod but it is nice and snug so it stays pointing where you set it to.

So, what is not to like. It might be considered too heavy for some but I like the feel and it is staying where I mounted it just fine. Probably the other quibble would be it needs its own microphone but I would say that if you are going to be in a Zoom, Skype call, or something like that for a while, a headphone or headset is going to be needed.  The other option is a wired or wireless headphone and microphone set. Since I now have a very good video camera, I might get a Bluetooth adapter for my desktop to use my wireless headphones and with that, I won’t be interrupting anyone near me during all these meetings.

But what about the image. I am impressed. Everything in the image is sharp and crisp and in focus. If I look at me sitting at my desk, you can easily make out the images on the wall behind me as well as being very well balanced with the exposure.

Except for not knowing intuitively where some of the features of Zoom are on the Windows computer, versus the iPad or smartphone, the 1SEE worked very well with my desktop. The video was very clear and really performed very well. People mentioned how much better my video was than the last time.  Same with a Skype calls that I made.

Available now from the website at $75 or if you really need the microphones, go with the 2SEE at $150 which includes the noise suppression and Echo Cancel technology.